A House of Prayer for All Nations

The church I attended as a teenager was a sharp contrast to the city that surrounded it. Miami in the 70’s was a mix of African-Americans, Haitians, Cubans, Jews, Anglos and other groups that usually kept to themselves and were often at odds. That was what the world looked like. My church was different.

Although we were small, we represented a cross section of the transitional neighborhood we worshipped in. Smiling faces of different shades sang of the love of Jesus in a mixture of accents. When we hosted a Haitian group that was starting a new church we became bilingual. During the week English as a second language was taught to recent immigrants seeking to improve their lives.

It was much later that I learned that the church could be as racially and ethnically divided as the world. Nevertheless, the local church is God’s answer to racial and ethnic strife. It should be an agent of healing and an example to the world. After all wasn’t the church born in the multicultural milieu of Jerusalem where God-fearing Jews of many nations heard Peter’s message each in his own native language (Acts 2)? Didn’t Jesus pray for the unity of all believers (John 17:20-23)?

Unity is not easily achieved even when people share the same language and culture. Sometimes, churches share a building but not ministries. This was the case in one church I served where Korean and Filipino congregations also met. There was bickering between groups, misunderstandings and prejudice on all sides. Eventually the two language groups moved on.

The economic reasons for multicongregational churches are obvious but the spiritual reasons are more important.

The people of God are not to be barrier builders, but barrier breakers through Jesus who makes us one (Eph. 2:14-15, 19). In the face of negative church perceptions, a multicultural church can serve as a gracious apologetic to the unbelieving world.

The multicultural church prepares us for a picture of eternity. “After this I looked and there before me was a great multitude that no one could count, from every nation, tribe, people and language, standing before the throne and in front of the Lamb.” Revelation 7:9 NIV

While we cannot ignore the cultural heritage of those who we are trying to reach we must heed God’s call to unity. Two major barriers are that people who speak different languages also tend to have differing worldviews and every cultural group tends to consider itself superior to others.

Christians from different cultures can work together if the spiritual needs of people take precedence over cultural differences and the Bible is viewed as superior to cultural differences. One other factor must be that the building and grounds must be viewed as owned by God; a place for worship and ministry to people, rather than an economic investment.

This was the case in New Orleans where I was called to start a Spanish language church. Although we were very small, we felt a call to start an English-language mission to share our building. The two groups worshipped in different languages but we were united during the week with children and youth ministries and a variety of events. Our children’s ministries led to an apartment ministry among African-Americans.

My fondest memories of that church revolve around Christmas Eve, when we shared a meal and some bilingual caroling. It was fun to watch the faces of the Anglos as the roast pig was brought in, whole, with the head attached. One year the joke was on me as I bit into a Nicaraguan meat pastry and found a very hot pepper.

I can already envision Grace Chapel with multiple services, multiple languages and a church open every day reaching out to EVERYONE in the community. It won’t be easy but it certainly will be worthwhile.
Posted by Jorge Zayasbazan at 1:16 PM No comments:

I recently received an email asking if I’d like to see my church double in 100 days. Who wouldn’t? The email was, of course, an ad for the latest gimmick that will bring church growth.

I’ve noticed that church growth is a lot like investing in the stock market. There are some who try every trick and short-cut in order to make a lot of money fast. If it’s not China, it is India, gold, Russia, or the Iraqi Dinar. They are gambling. A few will get lucky and strike it rich. The majority who lose money are rarely mentioned.

Some investors conservatively invest in mutual funds and ignore the hype. They use the tried and true methods of investing a little bit each month and end up with a respectable return.

I’ve noticed that some pastors and denominational leaders want church growth to be quick and dramatic. They go to seminars, read books, and subscribe to newsletters. Whenever some pastor “strikes it rich,” he is the latest expert and sells his own seminars, books and tapes. If it’s not cell churches, it’s purpose driven or emergent.

Like the market mavens who try (and fail) to spot the latest stock market trends, church growth experts tell us that we need to get on board with the DaVinci Code phenomenon which followed the Passion, 40 Days on Purpose, the Prayer of Jabez, Left Behind, Experiencing God, etc. None of these things significantly changed the American church. Some churches have experienced good results but, most often, gimmick growth results in the transfer of bodies from a small church to a larger one.

The church has been around a long time. I’m sure there have been many gimmicks in the past. Ultimately it is the power of the Holy Spirit that draws people to Christ. It is his grace that changes hearts and builds churches. This can happen fast but it usually happens at a slower pace and rarely results in a Megachurch.
Posted by Jorge Zayasbazan at 11:52 PM 1 comment:

Light the night on Halloween 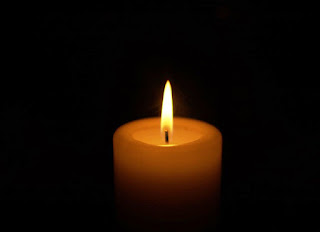 Some Christians hate Halloween. They point to its ancient pagan roots and cry "witchcraft!" They see kids dressed like witches, vampires and sorcerers and homes decorated with jack-o’lanterns, ghosts, and skulls and cringe in disgust.

There are those who turn off the porch light and dim the inside lights in hopes that the neighborhood kids will think they're not home. "No trick-or-treating here."

Christians are called to be salt and light in the world. Should we hide that light under a bushel one night a year? Jesus calls us to be his witnesses in difficult and, uncomfortable places. Jesus said, "My prayer is not that you take them out of the world but that you protect them from the evil one." (John 17:15).

The issue of the occult on Halloween is serious. TV shows and movies reveal a continuing interest in the occult and contemporary practitioners of the occult (a very small number) claim this day as their own. We know that Satan is real and that he "prowls around like a roaring lion looking for someone to devour." (1 Pet 5:8). We also know that we are engaged in spiritual warfare "against the powers of this dark world and against the spiritual forces of evil in the heavenly realms." (Eph 12). But Halloween is not a night to surrender and declare to be "Satan's Day." God did not give Satan a holiday; neither should the church! The Bible teaches, "Do not be overcome by evil, but overcome evil with good." (Rom 12:21).

On Halloween night more of your neighbors are out and open to contact than on any other night of the year. Their children are coming right to your door. Children don't know anything about witches or Satan. They just know that they get to dress up and get free candy. It's the only time they can accept candy from strangers.

Light up your house and yard. Make it the brightest spot in your neighborhood. Get out and interact with your neighbors. Offer prayer or a blessing for every child that comes to your door. Hand out candy with a smile and a kind word, maybe even a tract. Be a blessing on this night and make Satan hide.

Imagine the impact of every Christian in the nation lighting up their homes on Halloween? If Halloween night is dark it's because the light is not on!
Posted by Jorge Zayasbazan at 5:52 AM No comments: