Do not despise these small beginnings,
for the Lord rejoices to see the work begin…
Zechariah 4:10 (New Living Translation)
A few months ago, I casually mentioned to a deacon that we ought to open the church gym on Sunday afternoons for volleyball. I believed it would help build community among our younger members. His eyes lit up. “Let’s start right away.”

“Sure,” I said, meaning that we would set a date and do some promotion. He meant that Sunday. He purchased a volleyball got the keys to the gym and invited some people.

Our first day wasn’t that great; four people showed up (two were staff), we couldn’t find the net and there was strange odor in the gym (turned out to be gas). We pretended that there was a net and had a good time.

The following Sunday we had a net and two more people. A couple of months later, the gym is full. There are youth, children, young adults, and adults that were once young. People are rotating in and out and some are just content to watch and cheer (and laugh).

Today we launched a free lunch program to feed the children of our community and only nine kids lined up. The program is in response to the fact that Texas leads the nation in child hunger. The Baptist Standard recently reported that 22% of Texans under 18 are food insecure. This means that when food is prepared, it is usually of poor quality or an unbalanced diet leading to malnutrition and health problems.

Nine children seem hardly worth the effort but there are nine less hungry children. It also illustrates the reality only 7% of eligible children who were eligible received free summer lunches last year.

Nine is three more than we had for volleyball and tomorrow there will be more. Soon we will reach our goal of thirty and might surpass it.
Posted by Jorge Zayasbazan at 5:42 PM No comments:

I met some extraordinary young ministers when I was planting a Spanish-language church in New Orleans’ inner city. One young seminary couple came to a service and said they wanted to join the church even though they did not speak Spanish. They were called to foreign missions and wanted to discover if they could minister cross-culturally. They could. They sang, taught the children and did many behind the scenes tasks that led to our rapid growth and to getting a church building donated to us.

They were looking for a ministry and it eventually led to a job. He became pastor of an English-language group we started and went on to minister overseas.

Another young seminary student had a job. He was minister of music and youth in a town a short distance from NO. He wanted to do something more significant with his life so he resigned, found a secular job, and came to be our music minister. He and his fiancé provided a level of music not usually found in inner-city churches. His talents and leadership attracted other high caliber musicians. The exposure and experience he gained led to a call to be pastor of a multicultural church. He, too, went to minister overseas.

There was a female student who was finding it difficult to find a place to minister. She was called to be an Army Chaplain and needed staff experience in a Baptist church in order to fulfill a denominational requirement for endorsement. She persisted in the face of rejection until she found our church. She raised her own funding and worked full-time as children’s minister for two years. She gained valuable experience and deeply impacted our impoverished community.

During the summer she ran a day camp using youth groups from other churches. She borrowed church buses (and drivers) and took the kids to the zoo and other nice places. During the school year she led a weekly youth rally that featured local Christian bands and evangelistic youth speakers.

These students and others who came created a learning lab that was changing the lives of inner city families. They were putting their calling to work in a difficult environment of different races, deep poverty and bleak surroundings. There were disappointments and victories but, I believe God used these experiences to prepare us for future ministry.

Well done, good and faithful servant; you were faithful over a few things,
I will make you ruler over many things. Enter into the joy of your lord.
Matthew 25:21 (New King James Version)
Posted by Jorge Zayasbazan at 12:46 PM No comments: 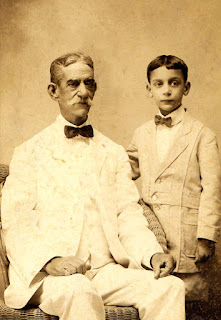 Numerous studies reported by the National Fatherhood Initiative show that the absence of a father puts children at risk. More than 24 million children (34%) live absent their biological father. This not only a problem for the families affected but, also, for American society as these children are in crisis and single parent families are in need of assistance.

This is an opportunity for the church to have an impact on society. God calls upon us to take up the slack.

Religion that God our Father accepts as pure and faultless is this:
to look after orphans and widows in their distress… James 1:27

Churches can address these problems through after school and summer programs, mentoring and teen mom groups. The root causes can be addressed through parenting support groups, marriage enrichment and divorce counseling.


Fathers, do not exasperate your children; instead,
bring them up in the training and instruction of the Lord. -- Ephesians 6:4

Posted by Jorge Zayasbazan at 10:31 PM No comments:

Does a church have to be big?

The median size of an American church size is 75. Nearly 60% of all American churches are less than 100. On the other end of the scale, only six percent of churches have over 500 in average attendance.

My own experience has been that you can have a healthy, effective church of between 50 and 100 people. Small churches can have an impact on its community. The church I was baptized in was smaller than 50. It had a big influence on my life and our neighborhood.

The church had a sizable building but had gone through a rapid decline when the interstate was built right across the street. The neighborhood transitioned from white, middle-class to impoverished and racially diverse. There was no sense of community as crime rose. Although the membership of Highland Park Baptist Church soon reflected the Neighborhood’s new demographics, it remained small.

No longer able to sustain traditional programs nor pay a full-time pastor, Highland Park partnered with suburban churches who wanted to work with the poor. One church helped with VBS each summer and another started an ESL/GED program.

Highland Park also hosted a Haitian mission that eventually took over the building but, in its final years, the struggling church saw three men surrender to ministry, started a new church, became the first pulpit for two ministry students and continued to be salt and light in its corner of Miami.

There are many churches out there like this. They are strategically located in areas of great need. They have no debt but few resources with which to minister to the community. These churches often pool resources to create a more effective ministry. They do youth ministry, backyard Bible clubs and other events together; some even share a pastor.

Partnerships among churches build up the workers and the Kingdom. It also demonstrates Christian community at its best. A church does not have to be big to be effective. By pooling resources a group of smaller churches can do the things the larger churches can do.
Posted by Jorge Zayasbazan at 5:00 PM 1 comment: