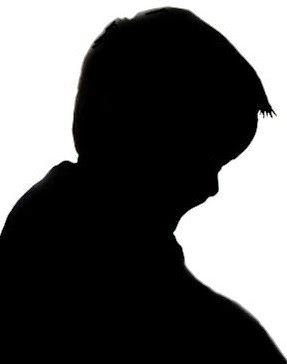 Seeking an education, a boy falls into a trap and becomes a victim of human trafficking.

I will call him Mark in order to protect his privacy and his life. I met Mark during a worship service in one of the camps at which I have been privileged to preach during the last 2 months.

Just before the service, I asked if there was anyone who would like to volunteer to read the scripture for me in Spanish during during worship. Mark volunteered.

We visited as the other young men filed into the cafeteria that was large enough to accommodate all of the young men and boys for worship. I asked Mark how he was. He said he was so thankful to God for the protection he has had and that he was praying that someone would help him through this ordeal.

Mark shared that when he was younger, he felt the call to be a minister of some sort but that he didn’t know exactly what God wanted him to do. He was hoping to get into a good school but was taken away from his family and forced to do imaginable things. Things that made him begin to doubt that God had chosen him for anything but bad.

He asked me, “If God really loves me, why is this happening to me?”

Mark was forced from his family and led into a life of drug dealing and stealing. Mark believed that he was no longer one of God’s children but that he belonged to another family; a family that educated him to live and hide in the streets.

When I asked Mark if he would elaborate on this. He told me that he was too ashamed and embarrassed to tell a pastor what he has done but that much of what he did was with someone watching him closely and many times at gunpoint.

Mark re-dedicated his life to Christ during that day and wants to obey God’s calling in his life. I shared with him about Baptist University of the Americas, his face lit up but, then, saddened because he did not know what his fate was going to be. I pray for Mark every day. I gave him one of my cards and I pray that he will one day contact me that he is ready to prepare for the ministry.

Mark is one of thousands who need our prayers and protection from human trafficking predators.

Dan Trevino is Associate Pastor of Baptist Temple Church in San Antonio. In the past month and a half, he has led 14 worship services for victims of human trafficking. The result has been 821 professions of faith, 577 re-dedications. Additionally, 58 staff members have, also, made professions of faith.
Posted by Jorge Zayasbazan at 6:36 PM No comments: 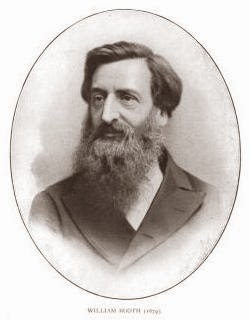 William Booth, founder of the Salvation Army, looked upon the urban poor of England in 1865 and saw a mission field as important as any in the world. Young women falling into prostitution, workers robbed of their wages, fathers addicted to alcohol, children and elderly dying from malnutrition and lack of access to healthcare; all with no prospect for a better life.

Booth sought to rescue the people who were the most desperate and neglected. He lived among them. He wept for them. He prayed for them. He formed an army of Christians determined to fight for the establishment of the gospel by every method love could devise.

Three principles would lead to life change: reconciliation with God, Christ-like living and service to others.

Booth recruited his army from among the folks that he was serving. He relied on the power of the gospel to transform the hopeless into urban missionaries. Even when he had rich benefactors, Booth still expected the poor to contribute their mites. He did not want to deprive them of the privilege of participating in God's work.

Opposition came from all quarters. Neither the established church nor the “enlightened” skeptics shared his belief that Jesus' love could save the worst of humanity. When Booth's Salvation Army proved to be successful they attacked him personally, questioning his motives but, even. the Paris atheist paper, The Voltaire, praised the results while still rejecting the faith.

While the plight of the urban poor does not seem as desperate in America as it once was, there are still women forced into prostitution, hungry children and elderly, addiction and crime. The gospel is still the answer.

When we meet the physical needs of people to reach their hearts for Christ; when we help the ones who become Christ-followers to develop God-honoring habits; when we give them opportunities to serve others in need; then we can truly begin to transform the lives of the poor around us.

Posted by Jorge Zayasbazan at 9:25 AM No comments:

JoAnn and Boyd White's customers get more than pottery when they come to J&B Ceramics, they get prayer, encouragement and love. “Sometimes, people will just drop in for prayer. They say that they feel good when they come here.” said JoAnn White co-owner (with husband Boyd) of the San Antonio store.

Everyday, at lunchtime, they serve sandwiches and chips for their customers. They invite everyone to gather in a circle, join hands and pray. Some decline, but all are welcome to eat whether they pray or not.

“Another woman did not want to pray and snapped, 'Don't ask me again and don't ask [my son] either. He can decide for himself, when he is old enough.” said JoAnn.

One day the little boy asked if he could pray with them. Jesus said, “Let the little children come to me, and do not hinder them, for the kingdom of heaven belongs to such as these.” (Matthew 19:14)

Not only do the White's bring ministry into their business, they, also bring their business in to ministry. For many years they have offered ceramics classes at Baptist Temple. The classes are attended by members from the church and the community. A local adult daycare is also part of the ceramics ministry family. Like at J&B Ceramics, people receive a lot of Jesus love and encouragement.

Ceramics classes are offered at Baptist Temple on Monday mornings and Tuesday evenings. Classes are free except the cost of materials.
Posted by Jorge Zayasbazan at 10:12 AM No comments:

A Passion for the Lost 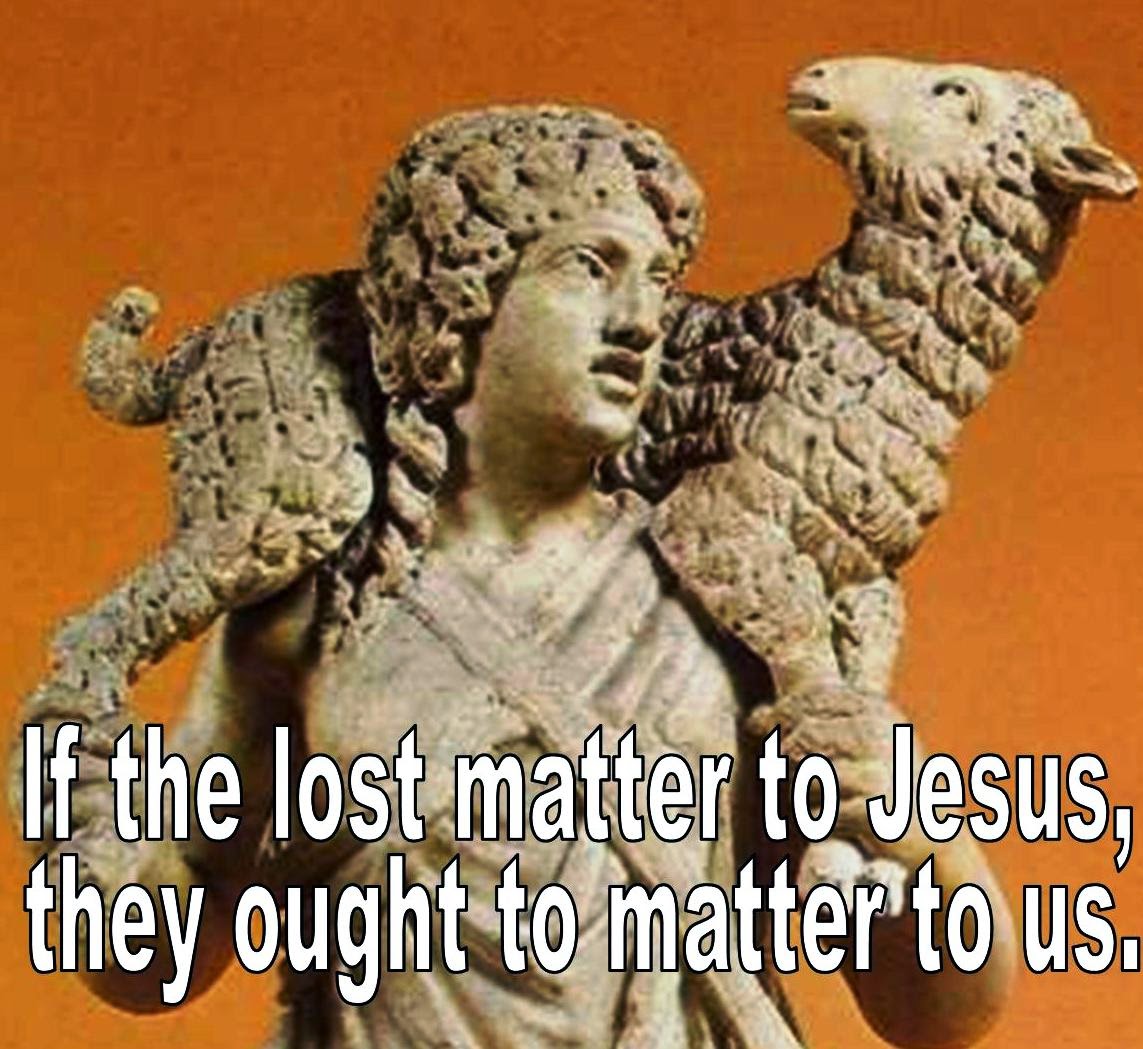 If “lost” people matter to Jesus, they ought to matter to us.
Members of the religious establishment objected to Jesus rubbing elbows with certain types of people. They said, “This man welcomes sinners and eats with them.”

A shepherd discovers one of his hundred sheep missing. He leaves the 99 to search for this helpless animal who could never find its way back. Most animals have teeth, claws, shells, quills or speed but sheep are defenseless. They get lost easily, too. (Luke 15:4-7)

In the same way we are helpless to rescue ourselves from our sin. Isaiah 53:6 says, “All we like sheep have gone astray; we have turned, every one, to his own way.”

God loves you as an individual. Jesus said, “Are not five sparrows sold for two pennies? Yet not one of them is forgotten by God. Indeed, the very hairs of your head are all numbered. Don’t be afraid; you are worth more than many sparrows.” (Luke 12:6-7)


Just as the shepherd set out to find his lost sheep, Jesus wants us to take the initiative in seeking out lost people.

A woman loses one of her ten silver coins. She lights a lamp and sweeps the house till she finds it. (Luke 15:8-10) Whenever we misplace something we need it becomes the highest priority in your life at that moment. Jesus wants us to take extraordinary measures to bring people into His Kingdom even though, like the coin, they don't know they are lost.

A lost son returns home to a hero's welcome. Every time something lost was recovered there was a celebration but this last story must have been hard for the Pharisees to swallow. The sheep and the coin had economic value but this was a wasteful, disobedient son who brought shame upon his family. He left home with his inheritance and spent it all on sinful living. (Luke 15:11-21)

Instead of a stern lecture, however, the father said to his servants, “Quick! Bring the best robe and put it on him. Put a ring on his finger and sandals on his feet. Bring the fattened calf and kill it. Let’s have a feast and celebrate. For this son of mine was dead and is alive again; he was lost and is found.” (Luke 15:11-24)

This ought to be our attitude towards those outside the church.
Posted by Jorge Zayasbazan at 9:07 PM No comments: