If your spiritual life seems like an uphill climb then let Caleb serve as a model for your ascent.

When Caleb was 85 years old he made this declaration to Joshua:

10“Now then, just as the LORD promised, he has kept me alive for forty-five years since the time he said this to Moses, while Israel moved about in the desert. So here I am today, eighty-five years old! 11I am still as strong today as the day Moses sent me out; I’m just as vigorous to go out to battle now as I was then. 12Now give me this hill country that the LORD promised me that day. You yourself heard then that the Anakites were there and their cities were large and fortified, but, the LORD helping me, I will drive them out just as he said.” (Joshua 14:10-12)

Caleb was confident that God could deliver on his promise. He was a witness when God parted the Red Sea and saw how God provided for his needs in the desert. He witnessed the collapse of walls of Jericho and the many victories that followed.

Caleb’s faith was consistent. We learn in Numbers that when 10 of the spies that were sent into Canaan voted to stay out of the Promised Land out of fear, Caleb stood with Joshua and gave the minority opinion. They boldly declared that God was greater than the armies and fortified cities. They were right.

Like Caleb we should choose the difficult challenges to increase our faith. How many mature and dedicated teachers choose to teach Sunday school in a clean suburban church rather than help start a new church? How many struggling churches do they drive past on Sunday morning? How many seminary students crowd into mega churches rather than go where they are needed? How many seminary graduates are without a church because they won’t start a new church or preach for free at one whose doors may soon close?

Be like Caleb. Choose the hill country. God will lead the way and conquer your enemies and increase your faith.
Posted by Jorge Zayasbazan at 10:11 AM No comments:

God uses unlikely people to do his work. 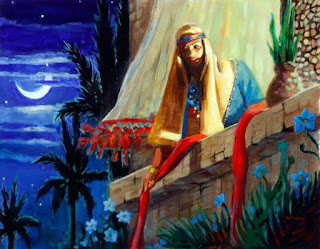 The first lesson is that loyalty to God takes priority over loyalty to earthly governments. When Rahab hid the spies, she sided with Israel against her own people (Joshua 2:2-7). It was an act of treason! There is no easy way to put it. Her king ordered that these men be turned over but she chose to deceive the authorities knowing that these men would destroy her city.

We can learn three important lessons from Rahab, the prostitute introduced in Joshua chapter 2. The Hebrew word translated prostitute could also mean an innkeeper but the New Testament makes it clear that Rahab was a prostitute. The Greek word is not as ambiguous. (James 2:25 and Hebrews 11:31)

Another example of this lesson is the refusal of the Hebrew midwives to kill the male newborns as commander by the Pharaoh when they were slaves in Egypt. “The midwives, however, feared God and did not do what the king of Egypt had told them to do; they let the boys live.” (Exodus 1:17)

A New Testament example is when Peter and John continued to preach the gospel in disobedience to local authority: “Judge for yourselves whether it is right in God’s sight to obey you rather than God.” (Acts 4:19)

A second lesson we learn is that the revelation of God in history was not confined to Israel. Canaanites heard the news and reacted in fear. Some, like Rahab, became believers. Rahab’s faith was based on the knowledge of the Lord’s mighty acts (Joshua 2:9-10). On that basis she decided that He alone is God (v. 11), and she acted on that decision to seek refuge in Him (vv. 12, 13).

The third lesson is that a person does not need to know every aspect of Bible truth before he or she can be saved. Both Hebrews 11:31 and James 2:25 indicate that Rahab had put her faith in Jehovah God before the spies ever arrived in Jericho. Rahab’s knowledge of the true God was meager, but she acted on what she knew; and the Lord saved her.

She is an example of the grace of God at work. Her salvation is not based on her character or merits. She was a prostitute, a traitor and a liar but Rahab showed more faith in the Lord than the ten spies had demonstrated forty years earlier. She said, “I know that the Lord has given you the land” (Joshua 2:9). Her faith was based on facts, not just feelings; for she had heard of the miracles God had performed, including the parting of the Red Sea at the Exodus.

Only two women are named in Hebrews 11 “Hall of Faith”: Sarah, the wife of Abraham (v. 11), and Rahab (v. 31). In contrast to Sarah who was Abraham’s wife and used by God to found the Hebrew race, Rahab was a non-Jewish worshiper of pagan idols who sold her body for money.

Matthew named Rahab as Boaz’ mother (1:5) in his genealogy of Christ. Rahab married into one of the important families of Israel and was the mother of Boaz who married Ruth and was the ancestor of both King David and Jesus.
Posted by Jorge Zayasbazan at 1:07 PM No comments:

Lack of faith results in a 40 year penalty for Israel

The first lesson I learned from studying the book of Joshua is that the people of Israel were entering a land that God had already won for them. All they needed to do was possess it.

Looking back to Numbers 13-14 we learn that Moses sent spies into the Promised Land. Ten of the spies reported that the land could not be taken. It was inhabited by hostile tribes in fortified cities. Two other spies, Joshua and Caleb, declared that, although there would be a fight, the God who had delivered them from Egypt would defeat their enemies.

The people were afraid and lacked faith and went the majority report. The result was that they wandered the desert for 40 years. That entire generation, with the exception of Joshua and Caleb, died without entering the Promised Land. They could have entered the Promised Land anytime but their fear and unfaithfulness robbed them of the victory that God had already won.

There is a lesson here for us. How often have we seen people reluctant to accept the gift of salvation that God has given to us through the sacrificial death of Jesus Christ? How many Christians struggle with sin when God has given us the victory?

6“Be strong and courageous, because you will lead these people to inherit the land I swore to their forefathers to give them. 7Be strong and very courageous. Be careful to obey all the law my servant Moses gave you; do not turn from it to the right or to the left, that you may be successful wherever you go. 8Do not let this Book of the Law depart from your mouth; meditate on it day and night, so that you may be careful to do everything written in it. Then you will be prosperous and successful. 9Have I not commanded you? Be strong and courageous. Do not be terrified; do not be discouraged, for the LORD your God will be with you wherever you go.” Joshua 1:6 - 9 (NIV)
Posted by Jorge Zayasbazan at 4:11 PM No comments: