Set apart and prepared for ministry 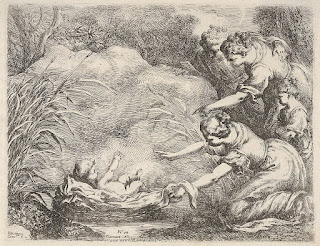 By faith
Moses’ parents hid him
for three months
after he was born,
because they saw
he was no ordinary child,
and they were not afraid
of the king’s edict.
Hebrews 11:23

Moses' ministry preparation had been put in motion centuries before his birth. His ancestor Joseph had been sold into slavery in Egypt by his brothers. God provided opportunities for him to rise through the ranks until he became second only to Pharaoh and administered Egypt's food distribution program. (Genesis 39-47)

A worldwide famine caused Joseph's father and his entire clan to emigrate to Egypt, where they were welcomed by Joseph and Pharaoh. He told his brothers, “As for you, you meant evil against me, but God meant it for good, to bring it about that many people should be kept alive, as they are today” (Genesis 50:20.)

The Hebrews (Joseph's people) prospered and grew in number, while maintaining their language, culture and religion. A change in government led to the Hebrews becoming slaves. Their continued growth led Pharaoh to order the death of all male children at birth. When the midwives did not comply with his decree, Pharaoh ordered all male babies to be drowned.

“By faith Moses’ parents hid him for three months after he was born, because they saw he was no ordinary child, and they were not afraid of the king’s edict” (Hebrews 11:23.)

Then, they placed Moses in an ark and floated him down the river where Pharaoh’s daughter rescued him. Knowing the child to be a Hebrew, she ignored Pharaoh's decree and adopted him. Moses' sister Miriam had secretly followed and offered to find a Hebrew wet nurse for the infant. Thus Moses’ mother was the one who nursed him. She would return the child once it was weaned but, for two or three years, Moses was nursed by his mother. She sang lullabies and told him stories that planted the seeds of faith in him. Paul reminded Timothy that his faith was first kindled by his mother and grandmother (2 Timothy 1:5.) The Bible tells us, “Train up a child in the way he should go and when he is old he will not depart from it (Proverbs 22:6.)

Following his early education in the faith at his mother's knee, “Moses was educated in all the wisdom of the Egyptians and was powerful in speech and action” (Acts 7:22.)

God had plans for Moses to lead, govern and give laws to a nation. Towards that end, the first 40 years of his life were spent in the courts of Pharaoh but the Bible tells us, “By faith Moses, when he had grown up, refused to be known as the son of Pharaoh’s daughter” (Hebrews 11:24.)

Moses thought he could help his people by his own power, prestige, and position but God had another plan. Moses murdered an Egyptian who was beating a Hebrew slave and had to flee to the desert. This brought about the next phase of Moses education.

In the desert, Moses became accustomed to hardship and poverty, learning how to live in want as well as how to live with plenty. Those whom God intends to exalt he will make humble first (1 Peter 5:6.)

His life in Egypt made him as a scholar, a gentleman, a statesman, and a soldier. Moses now learned about quiet deliberation and patience. He would come to know what its like to live close to God through the solitude of a shepherd’s life.

Moses needed to learn that it would be God who would deliver the Hebrews. God did not need Moses' military powers. He had to be weak and humble enough for God to use.

God is in control. He chose the date and place of your birth according with the mission he desires for you to accomplish. God uses the experiences of your life to prepare you for the challenges ahead. His timing is perfect.

Regardless of who you are or where you have been God desires to do great things through you. It can be difficult to understand or see the role that God has called you to but, if you remain faithful, it will eventually become clear.

Our past does not disqualify us from God’s service. There are no wasted experiences. God will take our past mistakes and use them to prepare us for what He intends to accomplish through us. God give us the ability to rise above our past and to accomplish great things for Him.

For we are His creation,
created in Christ Jesus for good works,
which God prepared ahead of time
so that we should walk in them.
Ephesians 2:10

Posted by Jorge Zayasbazan at 3:58 PM No comments: