Mateo was born in Cali, Columbia and came to the US to enroll at the Baptist University of the Americas (BUA). He graduated from BUA in 2018 with a dual major in music and theology. The practical side of his ministry training occurred, in part, at Baptist Temple, where he has served in with children, youth, community ministries and more. During summer breaks, Mateo would serve at different churches across Texas to gain a broader understanding of how churches understand and carry out their missions.

He keeps returning to Baptist Temple because of the creative ways we fund and carry out our ministry to the community. He sees a genuine love for both our neighbor and the members of the church. “I was made to feel welcome,” he says.

This atmosphere of welcome is reflected in the diversity of Baptist Temple's campus community. A diversity reflected not only in terms of race and ethnicity but, also, in economic, social and age as well.

The student body of BUA is around 50% international with students from Africa, Latin America, Asia and Europe. This multicultural mix has served Mateo well in his work at Baptist Temple.

This year, Mateo has returned as a Student.Go missionary; a missions program of the Cooperative Baptist Fellowship (CBF) that provides opportunities for students to serve with our field personnel and ministry partners as they live out CBF Global Missions commitments—cultivating beloved community, bearing witness to Jesus Christ and seeking transformational development.

Mateo is currently enrolled in the Master of Divinity program at Logsdon Seminary in San Antonio, where he leads music during chapel and is this year's recipient of the Mary Ellen Long Scholarship. Mateo seeks to apply his training by ministering to communities of need. At BUA he learned about Business as Mission (BAM) and began to develop a concept for supporting himself through bivocational ministry. In this way he will not be limited to serving only those churches that can afford to pay him.
UPDATE 2/25/21 - Mateo will be licensed this Sunday and will join the BT staff as Minister of Outreach
Posted by Jorge Zayasbazan at 10:03 AM No comments:

Spiritual but not religious 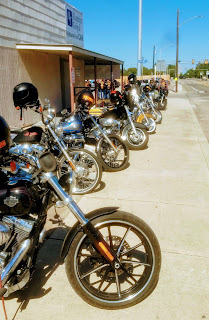 Six groups gathered for worship on the Baptist Temple Campus this morning. Five services were planned. One was a surprise; at least to the folks who plan campus events. Members of several motorcycle clubs, including the Banditos, gathered to remember a young man who was killed in a motorcycle accident at the intersection where our church is located.

The group that gathers across the street does not look like typical church attenders. They looked like the people that Jesus would hang with. You know, the kind that the Pharisees called riff-raff. No doubt most will count themselves among the “nones” (folks that claim no religious affiliation.)

Much is written today about the shrinking number of church attenders. The phrase “spiritual but not religious” is often thrown around. I can't quite define that phrase but, perhaps, what happened today in the shadow of Baptist Temple can serve as conversation starter.

These folks gathered on a Sunday to remember a lost loved one. They had rituals of remembrance and comforted one another in their grief; without the official sanction of the church.

These annual gatherings remind me of the human heart's need to connect with God and each other. It serves as a challenge to the church to reach out to the folks that feel out of place in the typical church; they way that the early church did. It gives me a picture of the people Jesus hung out with. Most important it a reminder that the harvest is plentiful but the workers are few.
Posted by Jorge Zayasbazan at 5:58 PM No comments: 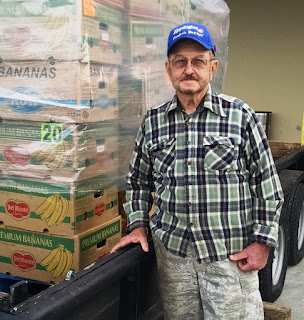 Willie Ronshausen and his wife Janet came to Baptist Temple in 1996, where he has served in many capacities including Deacon, Sunday School teacher, greeter, building and grounds, administration and more. He as been preaching at the San Antonio Rescue Mission for eight years.

Born on June 22, 1942 and baptized at the age of 10 in a Baptist church, Willie began Assemblies of God from age 12 until he came to Baptist Temple. It was as at Highlands Assembly of God where Willie first served as a deacon in 1987.

What Willie likes most about Baptist Temple is the friendliness and support of the members. This was something that he and Janet felt from their very first visit.

Willie is a cancer survivor and remains cancer-free by God's grace but the greatest miracle in his life came when he was run over by his own truck. He was working under the truck when it began to roll down hill and across his body. He suffered six broken ribs and his collarbone was broken in 3 places but no organs were damaged.

People rarely survive that type of accident but Willie says Jesus was with him then and through the process of healing. He guesses that God had more work for him to do.

Willie and Janet have been married for 41 years. He retired from the Army and civil service in 2002. He enjoys serving the Lord and helping people as well as hunting and fishing.
Posted by Jorge Zayasbazan at 4:55 PM No comments: 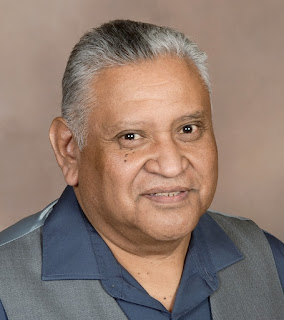 Michael Barron is one of the leaders of Sunny Slope Baptist Church; part of the family of churches that meet on the Baptist Temple Campus. He grew up in Cuero, Texas, as part of a devout Catholic family but the direction of his life changed when he began attending a Baptist church. Having committed his life to Christ, he made the decision to study theology in San Antonio at the Hispanic Baptist Theological Seminary (known today as the Baptist University of the Americas.)

What started out as a summer job in Cuero for Michael, turned into a 38 year career with HEB, where he currently works at the help desk. HEB helped Michael purchase clothes in high school, support his ministry training and continues to provide support as he serves God through the ministry of Sunny Slope. One memorable event that combined his roles at HEB and as a Baptist minister was when he gave the opening prayer at an HEB Recognition Ceremony.

Michael served an internship at Baptist Temple in 1982 and, upon completing his education in Christian Service, began serving at Sunny Slope. He has served as a teacher, preacher and administrator and has officiated more weddings and funeral services (in English or Spanish) than he can recall. For the last five years he has been involved in hospice, providing comfort and counseling to patients and their families that are nearing the end-of-life.

Although he has amassed a collection of Bibles and religious books that fill a room, you might be surprised to learn that his other hobby is finding souvenirs and visiting places related to the movie The Wizard of Oz. His hobby has taken him on tours and to museums all over the United States. His favorite character is Glinda, the Good Witch.

Michael Barron is one of scores of people who began their ministry as an intern at Baptist Temple. Sunny Slope Baptist Church was started in 1945 and is one of 15 new church starts sponsored by Baptist Temple.
Posted by Jorge Zayasbazan at 8:05 PM No comments: