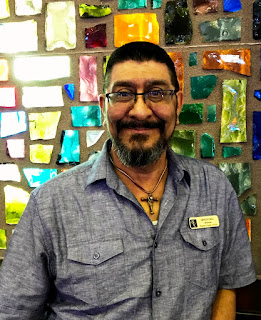 Ernest Cruz is our current Deacon Chair. He was raised in a Christian home with five brothers and a sister; attending Prospect Hill Church of God.


Ernest’s love of music was inspired by his brother, Robert, and his sister, Bertha. He excelled at playing the trumpet at Brackenridge High School, starting his first band in 1973, but had no real success. Not knowing what else to do, he joined the Marines in 1974.


While in the Marines, Ernest was quickly promoted to Lance Corporal. He was stationed first in Washington DC, then at Camp David under President Ford. Ernest tried out for the Marine Corp Band, but was not accepted.


He was discouraged by his lack of music education and, on returning to San Antonio, he enrolled at St Mary’s University, where he majored in music and minored in education. While there, he met many local artists, and joined and soon took over his second band, “Amity Band”. He then began a long, hard road of success and failures in the music industry.


Ernest played in bars, clubs and private parties, and soon found work as a DJ. In a world of dark and dangerous situations, sin filled his disappointing life. His first marriage ended because of the musician’s lifestyle


His parents never gave up on him. They prayed continuously, knowing that Jesus was his only hope. When he met Charlotte, Ernest's father helped both Ernest and Charlotte commit completely to the Christian life. They were married at Hot Wells Baptist Church, and became immersed in church life.


It was while Ernest was at Hot Wells that he started his music ministry and taught himself to play the guitar. God eventually led Ernest and Charlotte to Baptist Temple, where he leads the band. Ernest wrote the words and music to the song, “Welcome to the House of the Lord”, which he often sings to start the service.


Ernest was ordained a deacon at Baptist Temple, and has served as the Deacon Chair for the past three years. He also leads worship and preaches at the Lighthouse Rescue Mission downtown.


Ernest is a living testimony of how the power of prayer can take a life that is out of control and change it to a life of service to God.
Posted by Jorge Zayasbazan at 7:31 PM No comments:

Christ-optional, cultural Christianity is becoming a popular option in America.

Missionary Charles Studd once wrote, “Some want to live within the sound of church or chapel bell;
I want to run a rescue shop, within a yard of hell.”

But in America, as the total number of churches and Christians shrink, the remaining churches become larger and more remote from the areas of need.

I recently came across an article that listed five important factors in choosing a church. The list contained two I statements and three my statements. In other words, find a church that caters to your needs.

At the same time there is a growing number of folks that wonder if church membership is a necessary part of the Christian life. Some folks have decided that they are through with church. They have been labeled as “Dones” (done with church) by folks who track such things.

A growing problem in the American church is the idea that God exists for our sake. Perhaps it started with the easy believerism of “God has a wonderful plan for your life.”

This is a far cry from the words of Jesus, “Whoever wants to be my disciple must deny themselves and take up their cross daily and follow me.” (Luke 9:23)

The first five books of the Bible go to great lengths to describe the holiness of God and what it means to be His people. Peter summarizes it this way, “But you are a chosen generation, a royal priesthood, a holy nation, His own special people, that you may proclaim the praises of Him who called you out of darkness into His marvelous light.” (1 Peter 2:9)

To be a follower of Jesus is to a part of the body of Christ (1 Corinthians 12:27) the church, which is expressed in local gatherings, large and small. The best expression of this is seen in Acts 2:42-47, “They devoted themselves to the apostles’ teaching and to fellowship, to the breaking of bread and to prayer. Everyone was filled with awe at the many wonders and signs performed by the apostles. All the believers were together and had everything in common. They sold property and possessions to give to anyone who had need. Every day they continued to meet together in the temple courts. They broke bread in their homes and ate together with glad and sincere hearts, praising God and enjoying the favor of all the people. And the Lord added to their number daily those who were being saved.”

When looking for a church the best questions to ask are:

The church in America is shrinking in numbers and influence. Is it because many of our churches no longer reflect the ethics of Jesus?
Posted by Jorge Zayasbazan at 7:26 PM 2 comments: