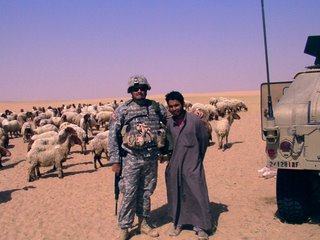 This is of one of the shepherds I frequently visit. We always share food with him and cold bottled water.

Living in the Arabian Desert this past year has brought the Bible to life for me. I have had ample opportunity to observe the desert and its inhabitants and meditate on Old Testament passages. I have seen foxes and the holes they live in; I have seen Bedouins and bandits; I have seen grazing sheep, poor shepherds and watched the grass wither.

I now understand what a precious commodity grass is. It is abundant in the spring and but withers in the heat and drought of summer. Although the land is very poor, there is enough to sustain camels, sheep and goats. The herds provide sustenance for people. In ancient times a man’s wealth was measured by the size of his herd. Herdsmen compete for the best grazing today as they did in ancient times.

In Genesis (GEN 13) we read about Lot's shepherds fighting over grazing rights with the shepherds of his uncle, Abraham. Lot and Abraham wound up going their separate ways. Abraham graciously gave Lot the choice of lands. Lot chose the better grazing.

Sharing was not a concept that Lot appreciated. It is a rare thing today. Whether it is grass, oil, market position or a comfortable seat, people compete for an advantage. I have watched as corporate executives have taken control of potential website names and vanity phone numbers so as to deny a competitor their use. I have seen supervisors slander bosses in order to get their jobs. One individual that comes to mind was always bringing up the faults of coworkers to his boss in order to divert attention from himself.

Lot made a choice that seemed to make sense at the time but things started to go badly for him. His family was ultimately destroyed by the choices he made. Abraham was a peacemaker and made a sacrifice that proved to be the wise choice.

Jesus said, “Blessed are the peacemakers, for they will be called sons of God. (Matthew 5:9) Instead of seeking to gain an advantage at the expense of another why not seek to live in harmony? You’ll probably get ahead faster and will be called a child of God.
Posted by Jorge Zayasbazan at 3:53 PM

"Cowboy up" seems to be a phrase used to describe the action of taking a deep breath, forgetting about the pain and fear, digging down deep, and carrying on to the end.

That implies the ability to overcome any given situation or emotion on our own. I do not believe that on our own, many of us have that strength of will. I believe that without relying on a strength, power and will higher than my own, I would never be able to get to the other side of adversity.

Yep, sometimes ya just gotta "Cowboy up", but you never have to do it alone.