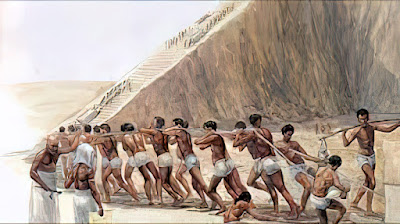 Then Pharaoh gave this order to all his people:
“Every Hebrew boy that is born you must throw into the Nile,
but let every girl live.”
Exodus 1:22

Jacob and his clan moved to Egypt to escape the famine in Canaan. Over time they became enslaved by the Egyptians and were forced into labor, making bricks for Egypt's building projects. The Hebrew slaves grew in numbers to a point that Pharaoh feared an uprising (Exodus 1:10.) As a population control measure, Pharaoh ordered that all male Hebrew children be killed at birth (Exodus 1:16, 22.)

This was not the only time in the Bible when inconvenient children were destroyed. When King Herod learned that a child was born who was destined to be King of the Jews, he set out to kill him. Failing to locate the child, he ordered the slaughter of all the boys aged two and under in Bethlehem (Matthew 2:16-18.)

Moses was spared by the midwives and “By faith Moses’ parents hid him for three months after he was born, because they saw he was no ordinary child, and they were not afraid of the king’s edict (Hebrews 11:23.”) Moses was a special child, destined by God for a unique role in history but isn't every child special?

The Bible tells us that “Children are a heritage from the Lord, offspring a reward from him. Like arrows in the hands of a warrior are children born in one’s youth. Blessed is the man whose quiver is full of them (Psalm 127:3-5.”) Yet, some find children an inconvenience. From 1980-2015 China enacted a one child policy that led to forced contraception, abortions and the abandonment of baby girls.

In the infamous 1982 case of Baby Doe, a child was born with Down syndrome and a blocked esophagus. The parents refused to allow the surgery that would have corrected the blockage. They allowed their baby to starve to death. The law and the hospital let this happen. He was allowed to die because he was considered defective and inconvenient. Ultrasounds and amniocentesis are routinely used today to detect congenital anomalies. An abortion is recommended if the child does not fit the “quality of life” model of our society.

A little over 20 years ago, a woman discovered that the child she was carrying would be be born with limb anomalies. She refused an abortion and raised her son (and his brother) as a single mom. The boy required multiple surgeries and greater care than would have been typically required. He grew up to be a handsome young man; a college graduate with a career in information technology who drives customized van.

Not all stories have such a heroic plot. Children are valued because they carry the image of God, not because of what they can contribute to society. A man I met told me of his four beautiful children. They were smart, athletic and talented. He was proud of them but it was his fifth child that taught him about love. She was born with Down syndrome and would never be the things his other children were. He realized that part of his love for the older kids lay in pride and their accomplishments. The youngest he loved unconditionally. He considered her a gift from God

Jesus said, “Let the little children come to me,
and do not hinder them,
for the kingdom of heaven belongs to such as these." Matthew 19:14

Posted by Jorge Zayasbazan at 7:20 PM