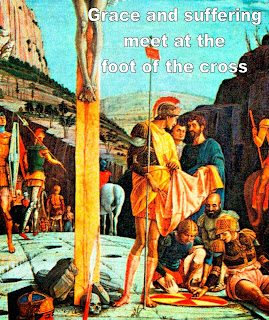 And they crucified him.
Dividing up his clothes,
they cast lots
to see what each would get.
Mark 15:24

The soldiers at the foot of the cross were at the scene of the most significant event in all of history, but they missed it. They were close to the cross, but far from Christ.

Familiarity made them indifferent. Soldiers performed many crucifixions. It was just another day at the office. Has familiarity caused the cross to lose it's impact today? We see crosses everywhere; on top of buildings, on tomb stones, tee shirts, on our jewelry. Given enough time, everything will be taken for granted; no matter how valuable.

We took the old rugged cross and polished it to make it shiny turning an instrument of execution into a fashion statement. However, displaying the cross is not the same as being transformed by it.

Materialism made them indifferent. The soldiers wanted Jesus’ clothes. It was part of their benefit package. There is nothing wrong with working and making a living but the soldiers were so busy gambling for Jesus' clothes that they never looked up to see the savior of the world.

Busyness made them indifferent. The soldiers were too busy to notice whom they were crucifying. We can be close to the cross but too busy to notice. Even good deeds become bad if they distract us from God. Jesus told of man who was beaten, robbed and left naked and unconscious by the road. Two ministers passed by the man without rendering aid. They were busy.

People who get used to going through the motions of serving God can fall asleep spiritually.
Posted by Jorge Zayasbazan at 10:03 AM