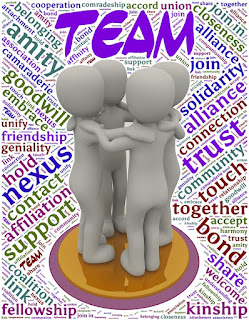 “Let us not give up meeting together,
as some are in the habit of doing,
but let us encourage one another –
and all the more as you see the Day approaching.”
Hebrews 10:25 NIV

Spiritually successful Christians understand that fellowship is essential for spiritual growth. The word usually translated “fellowship” in the New Testament is the Greek word koinonia (koy-nohn-ee'-ah.) It carries the idea of partnership, sharing and community. Here are three reasons why Christians should need community.

"And let us consider how we may
spur one another on
toward love and good deeds."
Hebrews 10:24 NIV

The early church met daily in the temple courts and ate together in their homes experiencing the energy of public worship and the intimacy of small gathering. The second chapter of Acts begins with the believers gathered together in one place. The Holy Spirit comes upon them and the chapter ends with multiple gatherings of Christians.

The church assembled, whether it is a megachurch of thousands or a house church of a dozen, is the place where we grow in our faith. It is where our faith moves from the theoretical to the practical. Our burdens are divided and our joys are multiplied.
COMMUNITY PROVIDES FOR MUTUAL CARE


"There were no needy persons among them.
For from time to time those who owned land or houses
sold them,  brought the money from the sales
and put it at the apostles’ feet,
and it was distributed to anyone who had need.”
Acts 4:33-34 NIV

When the primary bread winner of a family losses their job, disaster looms over the horizon. In a short time the family can find themselves homeless. One Sunday school class took quick action when a member lost his job. Their department, which was made up of three classes, conducted a garage sale and raised thousands of dollars. A powerful bond was created between those who participated & the couple that benefited and they had a good time.

There are no lone ranger Christians. There are at least 58 different teachings in the New Testament that cannot be followed unless you are a part of a group of believers. Jesus said, “For where two or three gather in my name, there am I with them.” (Matthew 18:20)

THERE IS POWER IN COMMUNITY


"Again, I tell you that if two of you on earth
agree about anything you ask for
it will be done for you by my Father in heaven.”
Matthew 18:49 NIV

When Peter and John were arrested for preaching the gospel (Acts 4), the believers gathered for mutual support and to pray . Once again, God's power was displayed. The house shook, they were all filled with the Holy Spirit, and spoke the word of God boldly under the threat of arrest.

One of my colleagues learned that his downtown Chicago church was to be the target of a disruptive protest by a coalition of left-wing groups. He decided to continue with Wednesday night prayer meeting as the hostile crowd gathered and chanted across the street.

Suddenly, busloads of Christians from other downtown churches started arriving. They lined the sidewalk between the church and the protesters and began to sing songs of faith. They choir continued to grow and soon the sound of praise drowned out the voices of hate. The discouraged protesters quietly exited.

View a video of “Fellowship Is Essential for Spiritual Growth.”

GET THE BOOK:
MasterLife: Developing a Rich Personal Relationship with the Master

This is part of the sermon series “How To Be Spiritually Successful.” It is based on the Masterlife study “The Disciple's Cross.”
Posted by Jorge Zayasbazan at 1:14 PM