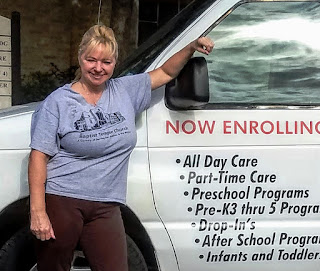 Born and raised in New Jersey, Kathleen Lanzalotto became the Director of the Baptist Temple Early Learning Center last year, just as the pandemic hit. At first, the decision was made to shut down the ELC, but the child-care needs of medical personnel and other essential workers led us to reopen.

Leading the training and creation of new protocols, Kathleen created a safer environment for teachers and children. In two weeks, we were back in business. By the end of the year, we acquired a new van and expanded our after school program by providing services to other area schools.

Kathleen always wanted to be a teacher but had been told she was not smart enough. Kathleen has dyslexia, a disorder that makes learning difficult. Refusing to accept limitations, she attended school part-time and earned a Bachelor’s degree in child development and business.

Her personal struggles with traditional learning systems helped her to raise two children with dyslexia. Both achieved academic success. The oldest received an Associate’s degree in cosmetology, the youngest is in college studying to be a doctor and has a 4.0 Grade Point Average.

Following her husband’s death in 2010, Kathleen moved to San Antonio to be closer to family. Having previously operated a Montessori Academy in New Jersey, Kathleen opened an early learning center in San Antonio, applying her academic training and her sensitivity to children who learn differently.

She sold her successful business but soon returned to the field of early childhood learning. Feeling there was more for her to do, Kathleen accepted the position at Baptist Temple. Kathleen wants to take BTELC to the next level, so it becomes the standard for other schools to follow. Our Google rating went from half a star to 4.3 stars in her first year.

Kathleen's leadership has enabled the BTELC to excel through challenging times.  We recently passed all our inspections with no negative observations. Parents are saying, “I’m calling you because you have a five star rating.”

Posted by Jorge Zayasbazan at 9:11 AM